THE CASE FOR SATAN'S RULE

The great trouble with the world today and with the church unfortunately, is that they know so little about the devil and his "principalities and powers."(1)

Because the average American knows so little about the devil and his hierarchies of principalities, powers, and rulers (Ephesians 6:12) we do not realize how he controls us and society unless we study the scriptures to get clues as to how he operates. He is in control of and commands a great army of fallen angels. In other words this is not just some nebulous concept about evil, but about an organized effort to control world events through evil men and and evil spirits.

Three times the Bible calls Satan the the "prince of this world" (John 12:31; John 14:30; John 16:11 NIV). He's also called the "prince of the power of the air" (Ephesians 2:2). [Watch what you say: your phone company has allowed the NSA through government approval to turn on your mobile phone's microphone remotely and listen to your conversations any time they wish. Treat your mobile phone as you would any "hot potato" and never say anything negative that the government could use against you. Remember to treat your phone as if someone is always listening! The only way to stop this potential 24 hour surveillance is to store the phone in a Faraday sleeve which will stop the radio signal from turning on the phone remotely.....ed.]

Only the "elect" will not be deceived (Matthew 24:24; Mark 13:22), and the deception will grow ever greater as we approach a one-world government based on Satan's principles of lies, evil, deception, destruction and murder.

Why was the Dept. of Homeland Security (DHS) created?

This is the official military logo used to represent the JADE HELM 15 military exercises in the United States. Note the coble shoe in the center of the logo. According to Dave Hodges the coble shoe was worn by prisoners in NAZI concentration camps during World War II. 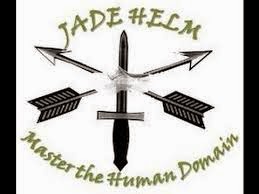 Operation Jade Helm to be held from July 15, 2015 to Sept. 15, 2015 in the United States is just the warm-up for what is coming! It is to practice extraction of dissidents [which occurred in Ft. Lauderdale, FL. on March 27, 2015)(Master the Human Domain] and to determine how well the military can blend in (Master the Human Domain) with the local population and remain undetected etc. The 82 Airborne and various National Guard Units will be used to carry out the geographic isolation of troubled areas according to drill scenarios. It is to condition the American population to accept eventual military control and confiscation of all firearms per the recently passed United Nations treaty on arms sales.

See also: The 1961 State Department Plan to Disarm the American Population to Conquer America From Within.