One cannot read the facts, verify them and come away with any other conclusion than to believe that Obama’s mission is to fundamentally destroy the United States of America. Review the documentation for the conclusions drawn in this article. Investigate yourself, verify the facts, and then share this article with everyone you know including your elected representatives.

Obama is the right man, at the right time to engineer a total communist subversion of the United States. These are not merely the words of journalistic rhetoric designed to sensationalize the sentiment which has grown in opposition to the communist policies of an unpopular president.

The United States is months away from a total subversion of all of its constitutional principles, its traditions, its wealth and ultimately the freedom and survival of millions of its citizens.

Vladimir Lenin once uttered an ominous warning for our time "The Capitalists will sell us the rope with which we will hang them." Even Lenin had no idea that a devout follower of his communist doctrines would ever become the President of the United States. He thought the Soviet Union would topple America from the inside. However, it isn’t a Russian communist who is destroying America, but rather it was a domestic communist, Barack Hussein Obama, who is tying the noose around the neck of all freedom-loving Americans.

Obama has been surrounded by nothing but communists for all of his life. From Obama’s real father, Frank Marshall Davis, to the husband and wife communist terrorist team of Bill Ayers and Bernadine Dohrn from the Weathermen Underground terrorist organization, Obama has known nothing but Marxist, communist philosophy in his formative years. 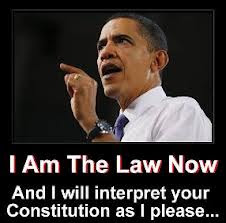 
A U.S. Marine veteran unleashed his anger at President Barack Obama in a direct video message that quickly went viral.

The unnamed Marine, a resident of Chattanooga, Tennessee, first took Obama to task for his response to the deaths of five servicemen in a terrorist attack in the city.

"The day of the attack, you deliver a statement and you don’t even have the decency to stand up," he said, citing examples of other instances in which Obama stood when making statements about events.

"You sit slumped down in a chair and ramble through some poorly scripted apology that sounds as sincere as 'if you like your doctor, you can keep your doctor.'

He also schooled the president on his desire to erase U.S. history.

"Our Founding Fathers knew this day would come, so they left us, the people, the power to overcome," he said. "Mr. Obama, you are a tyrant and nothing more."

"Those who don't know history are doomed to repeat it."...Edmund Burke
OurFutureWorld.blogspot.com